This summer I’ve been fortunate to read some great books. Among others, I read Jon Meacham’s The Soul of America on the beach, flown cross-country while audio-booking Beneath a Scarlet Sky, and indulged a (wishful-thinking) Teddy Roosevelt kick by powering through both River of Doubt by Candice Millard and The Bully Pulpit by Doris Kearns Goodwin. While I’ve enjoyed them all, none hit my list of the top 4 books that have shaped my life.

The only one of the quartet I’ve already passed down to my kids, I must have read this book hundreds of times in kindergarten. My original 1980’s copy had long ago disappeared, but incredibly my wife found a copy of this childhood memory in a used book store soon after our oldest daughter was born.

For the uninitiated, Grover Goes to School is unsurprisingly about Grover’s first day of school and his efforts to find friends. While elementary in its storytelling, the book’s message is even more important in today’s world: namely, that we don’t have to change who we are or what we believe for other people to like us. In the end, it’s better to unashamedly be ourselves rather than risk winding up with no cookies, a broken truck, busted crayons, and someone else’s baloney sandwich: As a teenager, I pilfered this small volume from my grandfather’s basement library when I was just beginning to awaken to the power of words. Its weathered title page read “Copyright 1927” making the 650-page text seem like it contained ancient secrets I’d liberated from years of neglect. I read from Wordsworth and Milton, Frost and Whitman, and dog-eared page after page from the poets of the Romantic Period. I was young and excitable, all promise and potential, and their words spoke to me with a power I had never before experienced.

I used to carry the book with me everywhere, but when its nearly century-old spine finally began to break I parked it on a shelf in my own library for fear of disintegration. Of all the book’s mystic chords, it was this poem by Keats that stood above the rest to a smart, awkward kid who took refuge from chaos (then and now) in the quiet comfort of an ordered mind: 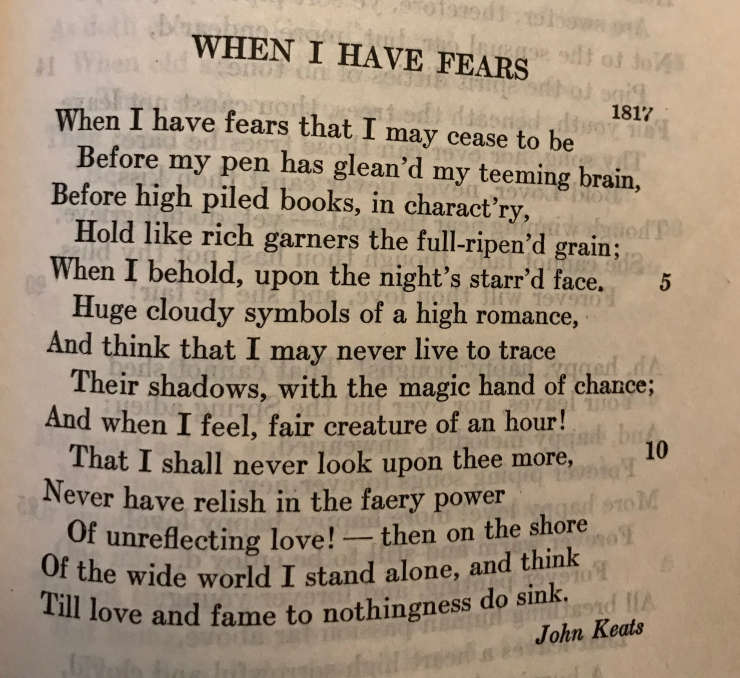 The first time I read Gen. Powell’s treatise on life and leadership, I was only a month into my tenure at Mission Health. I came to Mission straight out of fellowship, and my role as Vice President and Chief Patient Safety Officer was my first formal opportunity to lead a big team. The concrete, practical principles in this book resonated with the way I wanted to lead, and I’ve returned to them at least once a year ever since. From maintaining weekly in-person team huddles to regularly see the whites of my direct reports’ eyes all at once, to focusing first on defining purpose before jumping to tactics, to building a great team and directing most of my energy towards enabling them to do great things, I haven’t gone wrong in applying Powell’s wisdom in life or leadership.

Since most of my leisure reading since college has been via audiobook, I didn’t actually own the hardback copy of It Worked for Me until this year. When I finally bought it, I mailed the book to the publisher to secure a signed bookplate and included a letter of gratitude expressing how much the book meant to me. I also asked, without hope of reply, what the General’s one-sentence guidance would be for a leader still early in his career and bent on improving the health of Americans nationwide. His reply will forever hang framed in my home office – while I can’t say I’m succeeding on the no-weekend work (and I’m not totally sure he did either… you know, with the whole war thing and all), I couldn’t agree more about strength through family: 1: The Spirit Catches you and You Fall Down

Believe it or not, Anne Fadiman’s tome on the intersections between western and traditional Hmong medicine is actually one of my least favorite books. I read it once as an undergraduate student and somehow found a way to skip out on the author’s mandatory lecture. I was then required to read it again as a first year Duke medical student, and figured that was proof I simply could not escape Ms. Fadiman’s grasp. Why then, you ask, would such a book make it to Number 1 on the list of books that shaped my life?

Late in my second year of medical school I had the best Chief Resident in the history of the hospital. We had been on-service together for about a week, and around noon on a Tuesday he looked me in the eye and said “Christopher, you are a fantastic medical student, you work hard and deserve some rest. Give me your pager and go take a two-hour lunch break.” Before he could change his mind I thanked him profusely, handed him my pager, and sped off the ward.

Medical students have a preternatural ability to sense free food anywhere in the hospital, and that day for me was no exception. I followed my nose down to the lecture halls on the hospital’s second floor, where indeed there was a talk in the main hall accompanied by a free lunch open to medical students. An author was speaking… and of course, it was Anne Fadiman. She had come to Duke to deliver some version of the mandatory lecture I’d skipped in college, a final stroke of karma smacking me upside the head.

And that’s when I saw what the other lecture hall had planned for the day.

Outside the smaller room was a table filled with more free food and copies of a book written by a double-amputee who had climbed Mount Kilimanjaro. And surrounding the table were countless nursing students. My eyes met those of one particularly attractive twenty-something who was wearing a white patterned scrub top and navy pants. She was standing with a few other nursing students and smiled when she caught me looking at her. The first thought that hit my brain was “Whoa.” The second was “What the hell Chris, give it a shot.”

I walked up to her, introduced myself, and we chatted while she worked her way through the lunch line. I asked her to save me a seat in her lecture hall and said I would sneak out of mine as soon as I could to join her. She agreed, and as soon as Ms. Fadiman took the stage I snuck over the back row of chairs, shuffled past a cluster of sleeping medical students, and silently exited the room. Sure enough, there in the very back row in the very back corner was my nursing student, saving me a seat. I have absolutely no memory of the lecture, my attention instead fixed on a pair of blue-green eyes unlike any I’d ever seen before. We’ve been together ever since.

I am certain that Anne Fadiman is a terrific speaker. Her books have won countless awards and her critical acclaim will far eclipse anything my writing will ever achieve. Yet it’s only because I’ve never connected with The Spirit’s content that I find myself today happily married, a father of three, and two-for-two on skipping mandatory lectures.

Be who you are, build a strong mind, lean on a strong family, lead with purpose, and sometimes just take the risk and skip a mandatory lecture – five basic lessons from four books that form much of the core of who I am as a doctor, a father, a husband, and a leader.

While I can’t promise these books will have the same transformative effects for you as they’ve had for me, I am sure there are certain books that have become touchstones for you in your journey through life as well. And because words only increase in power when shared with others, I invite you to share this article with your friends and connections and add to the comments at least one book that’s had a defining influence on your own life!

Dr. Chris DeRienzo is a dedicated husband, a proud father, and a mediocre triathlete. He’s also a doctor dedicated to improving the health of all Americans and striving to live like a spectacle of the human engine driven at full speed. You can read more about him at www.drderienzo.com or follow him here on Twitter.

One Reply to “What Books Changed Your Life?”