This is Prometheus, a Pinus longaeva thought to be the oldest living thing when he was felled 1964.  At nearly 5,000 years old, the rings in Prometheus’ massive trunk tell the story of a bristlecone pine whose life stretched from the end of the bronze age through the beginning of the space age.  Thick rings recall years of plentiful water and good health, thinner rings a sign leaner times and drought, and more than a handful of rings wearing the unmistakable scars of battle with fire.

The history of our nation is no different.  For nearly 250 years, America’s story can be read in the lives of Americans – through famine and plenty, health and disease, strife and peace, the health of our people tells a story just as vivid as the rings of Prometheus.  Each new generation of Americans has lived both longer and better than its forebears, as two centuries worth of innovations in industry, commerce, and technology have been matched by advances in sanitation, clean water, food safety, vaccination, and healthcare.

Yet despite our still-growing technical and economic prowess, for the second year in a row Americans’ life expectancy WENT DOWN.

That’s right – Americans today are now expected to live SHORTER lives than we were in 2015.  Admittedly this isn’t the first dip in our national life expectancy curve, but most dips in the last 150 years are attributable to war or infectious pandemics (think the 1918 Spanish Flu).  And since World War 2 the curve’s noisy rise has largely settled into a fairly smooth, consistent upward deflection.

While it would be fair to assume profound medical advances are largely responsible for these gains – the 20th century did see the advent of antibiotics, coronary artery bypass surgery, surfactant therapy for premature infants, and much, much more – over 80% of our improvement in life expectancy since 1900 is attributable not to medicine but to public health.  And its our public health that’s to blame for our falling life expectancy.  The story our rings tell today isn’t one of stalled medical advancement, massive infectious pandemic or world war, but rather of two preventable and treatable public health epidemics.

We’ll start with obesity.  Barely 16 months after publishing this story with the headline “America’s Obesity Epidemic Hits a New High,” NBCNews was compelled to publish another story titled “America’s Obesity Epidemic Reaches Record High.”  Why?  Because in just one year – from 2015 to 2016 – the CDC estimated another 4.5 million adults and 1.1 million children and adolescents joined the ranks of the obese with body mass indexes (BMI) cresting 30.

Based on our current estimated population of around 325 million, this means around 111 million Americans are driving between $150 and $200 billion in excess healthcare costs and $4.3 billion in lost economic productivity each year while living shorter, sicker lives.  At that cost, we could buy every obese American 6 months of three healthy meals per day and a full year’s gym membership and still save $33 billion a year.

While some signs point to a flattening of the obesity curve, our nation’s second acute public health crisis – substance abuse and specifically the Opioid Epidemic – worsens by the day.  Data published just last month shows that one American dies every 7-8 minutes from an overdose.  Two-thirds of those overdoses are opioid-related… and rising.

The annual total number of deaths related to drug overdoses now tops 63,000, more than all American fatalities in the Vietnam War and Operation Iraqi Freedom combined.  In comparison, motor vehicle accidents kill just under 40,000 Americans a year and HIV/AIDS kills just under 10,000.  Each have benefited from multi-billion-dollar research and intervention efforts that have successfully brought down fatality rates over the last 30 years.  The Opioid Epidemic has not. 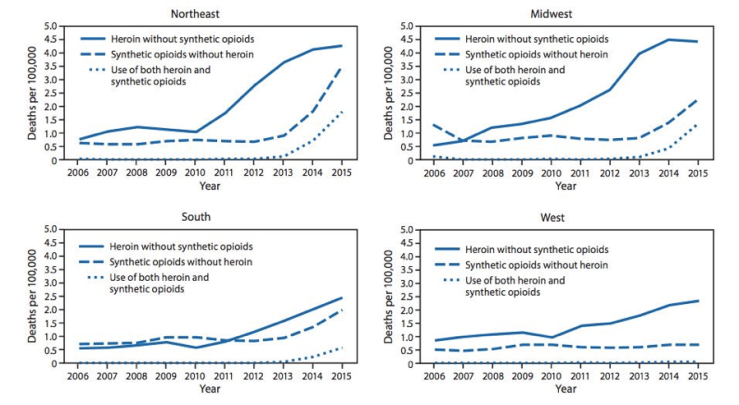 To stem the tide of these two massive waves, we need to fundamentally re-think how America invests in health.  Investments in public health interventions are dwarfed by mammoth public and private investments in acute care and pharmaceuticals, and are still falling as a relative share of our per capita healthcare spending.  While we’ve finally  begun experimenting with ways to sustainably bring “social determinants” interventions into the healthcare ecosystem, it’s not nearly enough.

In a cruel twist of fate, Prometheus was felled ostensibly in the spirit of research.  Imagine killing the oldest living tree while on a quest to discover just how long the oldest trees can live.  That’s what happens we we don’t pay attention.

As a nation we’ve been too willing to repeatedly clip dandelion heads off our public health problems than do the harder work of digging them out by the roots.  It’s time to pay attention – our rings are telling the story and we must heed their call.

2 Replies to “Rings of Prometheus”