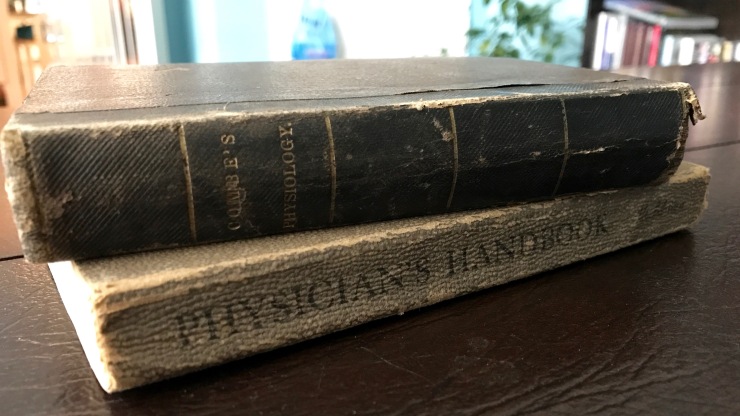 These two books are some of my most prized medical possessions.  The first, Combe’s Physiology, is an 1843 edition of a text by Andrew Combe, MD, “Physician Extraordinaire to the Queen in Scotland and Consulting Physician to the King and Queen of the Belgians.”  The title page takes care to note that 6 woodcuts appear in this seventh edition of a book whose full title takes several lines to complete:

The Principles of Physiology

and to the improvement of

The second book is simply titled Physician’s Handbook and is the eighth edition of a manuscript by Lange Medical Publications published in 1954.

Leafing through these texts provides a helpful window into why keeping pace with advances in medicine today is not just a little harder than it was for physicians in days of Oliver Wendell Holmes (Sr.) or Marcus Welby… its exponentially harder to the point of impossible by traditional means.

Take the management of infectious diseases.  In Combes Physiology – written before either Pasteur or Semmelweis and three years after Britain began providing free smallpox vaccination using Jenner’s cowpox inoculation without any clue how it worked – the word “infection” doesn’t even appear in the Index.  Rather, Chapter X “Application of the Preceding Principles” speaks to what the author believed to be “the real origin of bad health.”  There were in fact three such “origins” (pages 308-309):

First, as having no necessary connexion with with our conduct, but as being the result of circumstances entirely beyond our knowledge and control, and sent by a superintending Providence, not to urge us to more rational care, but to soften our hearts and warn us from sin.  Secondly, as the result of accident alone or of external influencers which we can appreciate, but from which it is impossible to withdraw ourselves.  Thirdly, as, in every instance, the result of the direct infringement of one or more of the laws or conditions decreed by the Creator to be essential to the well-being and activity of every bodily organ, and the knowledge and observance of which are, to a great extent, within our power.

By 1951, physician-scientists had clarified many “circumstances” previously thought to be “entirely beyond our knowledge and control” including the concept of infectious diseases.  So much so that 8 whole pages of Physician’s Handbook were devoted to “Chemotherapeutic and Antibiotic Agents” and page 380 even included a table of which diseases the seven available antibiotics were most suitable to treat:

In contrast, as of December 2016 Wikipedia’s “List of Antibiotics” page counts no less than 144 different drugs while its “List of Antivirals” includes 87 others that Physician’s Handbook doesn’t speak to at all.  This of course is because the first antiviral (Acyclovir) wasn’t even developed until 1977.  The WHO’s 2013 report Critically important antimicrobials for human medicine report runs to 31 pages and lists more classes of antibiotics than the Physician’s Handbook table included actual drugs.  Finally, the Journal of Infectious Diseases, which began as a quarterly publication in 1904 and is now published biweekly, yields over 2,000 pages of new infection-related science each year.

And that’s just one journal.

Newborn medicine provides another remarkable example.  While Combes doesn’t devote much copy to the care of newborns, it does celebrate the utility of fresh air and country-living as a public health intervention to reduce infant mortality.  From page 312:

A hundred years ago [the mid 18th century], when the pauper infants of London were received and brought up in the workhouses, amid impure air, crowding, and want of proper food, not above one in twenty-four lived to be a year old; so that out of 2800 annually received into them 2690 died.  But when the conditions of health came to be a little better understood, and an act of Parliament was obtained obliging the parish officers to send the infants to nurse in the country, this frightful mortality was reduced to 450 instead of 2600!

While a reduction in infant mortality from 96.1% to 16.1% is astonishingly successful, by the time Physician’s Handbook was published 4 whole pages were devoted to newborn care under “Infant Feeding.” These included a table of the appropriate proportions of Karo syrup, Water, and Evaporated Milk to mix when making “formulae for Artificial Feeding.”  Dr. Virginia Apgar’s APGAR score, developed one year earlier in 1953, isn’t mentioned at all and the American Board of Pediatrics wouldn’t offer the first board certification exam in neonatology until 1974.

Since then, the Journal of Perinatology – again, only one of many peer-reviewed journals specific to neonatal-perinatal medicine and only published in its current form since 1984 – now produces over 1,000 pages of material each year related to the care of high-risk mothers and premature newborns.

The point here isn’t to disparage physicians of yesteryear or make excuses for today’s highly indebted and increasingly burned out crop of new young physicians.  Rather, its to bring into focus the actual results of commonly-quoted adages about how fast medical knowledge doubles.

In my lifetime alone, estimates of medical knowledge doubling time have dropped from every 8 years in the 1980s to a projected 73 days by 2020.  If this holds true, the chart below represents the increase in medical knowledge for a typical medical student graduating in 2024 (and experiencing approximately 20 cycles of 73 day doubling):

That’s right – by the time she graduates, a medical student in the entering class of 2020 will watch the world’s complement of knowable medical information increase over 500,000 times, and that’s already from a starting from a place much different than either Welby or Holmes.

All this to say that exponential growth requires totally new ways of thinking about our understanding of medicine and our ability to apply medical knowledge to the treatment of patients.  Advanced analytics, true point-of-care clinical decision support, and increasingly granular sub-specialization of both physicians and the centers in which they practice are likely responses, but the future of medicine truly belongs to the innovative disruptors who figure out how to better harness this increasingly vast amount of medical information for the betterment of humanity.

Impossible to imagine… but incredibly exciting.